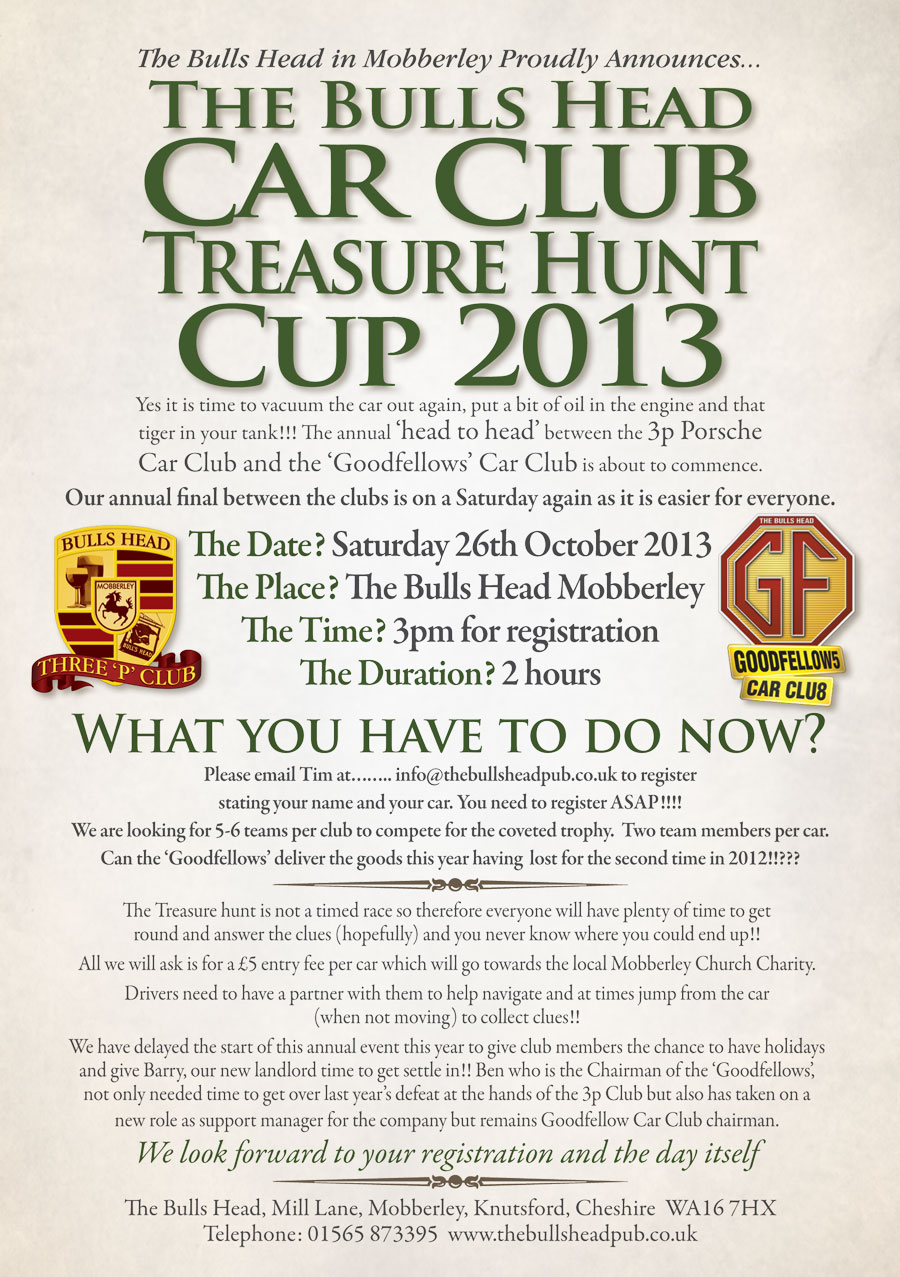 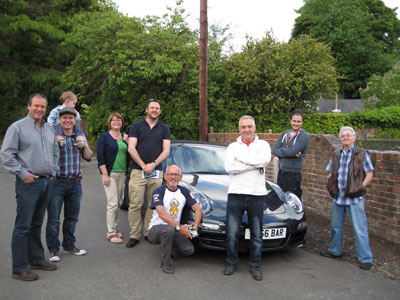 CAR CLUB MEMBERS BEFORE LEAVING FOR CHOLMONDELEYS PAGEANT OF POWER

Each year The Bulls Head car clubs, Tim’s 3P (Porsche Pub and Pint) Club and Ben’s Goodfellow’s Vintage and Classic Car Club, have a day out at Cholmondeley for the Pageant of Power. This year was no different with members meeting at the Bulls Head for the traditional bacon butties and lots
of coffee before heading out convoy style to Cholmondeley. The members were also treated to a rather nice gin and tonic after a great day of being
‘petrol heads’. The Pageant of power is Cheshire’s answer to Goodwood but with far more Cheshire charm.

We are still looking for members to join our car clubs whether you drive a Porsche or a classic/vintage car. Ben also welcomes some of the odder
vehicles in to the wide reaching Good fellows club!! As he says if you take the ‘go’ out of ‘Goodfellows’ you get ‘Odfellows!!!’ which explains buses
and steam engines being members!!

Events are being organised throughout this year for members including our annual treasure hunt challenge between the two clubs. So if you love your
car, join our clubs and meet up with other enthusiasts!! 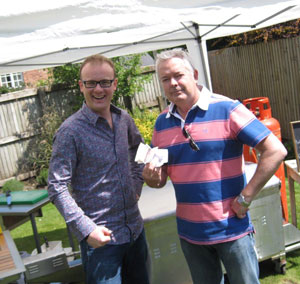 BIG SMILES FOR BEN AND A PAINFUL DEFEAT FOR TIM AS GOODFELLOWS MEMBERS WIN IT!!

Landlord Ben, owners Tim and Mary and the team celebrated their three year Anniversary of the ‘new’ Bulls Head in style with sunshine…yes sunshine and a full garden and full bike park!!

The Party was on Bank Holiday Saturday and everyone enjoyed the Cheshire Hog Roast with Birthday ales on the bar and our new Summer drinks Menu. There were cupcakes and Nostalgic specials on the board!! Live music from our old Jazz boys Smoooth. We cannot believe it is three years!!!

Congratulations to Ben and the ‘Good fellows’ Car Club who are victorious on the membership championship in May 2013!!!

Tim agreed to pay the usual losers fee!!! £100 to Bens chosen Charity….Witness………at www.witness.org…so all for a good cause!!

This means that the Membership Championship now stands at 2-1 to the Ben since starting back in May 2010!!

A big thank you to all our customers for supporting the Bulls Head over the years since we rescued it from closure back in 2010!! 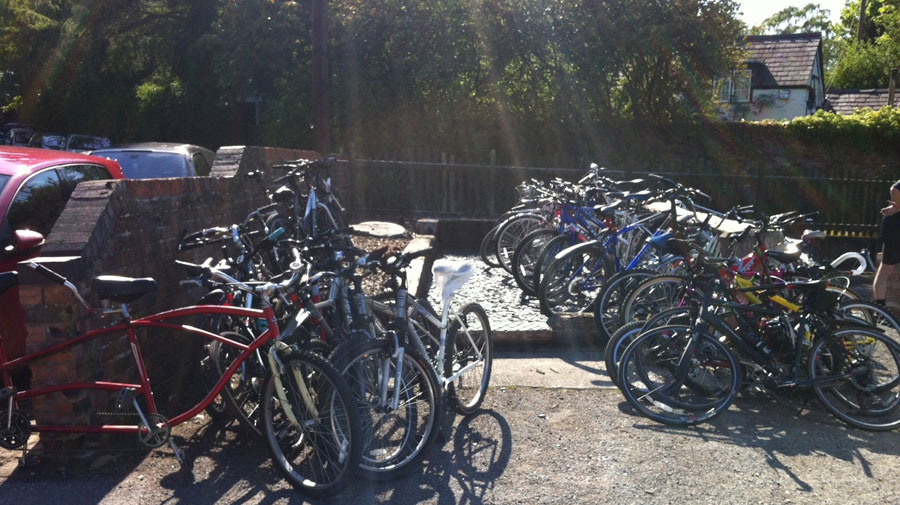 Ten cars, two teams, a sunny day and the beautiful Cheshire countryside what else could you ask for?? The engines were revving and the competition was hot…Tim’s 3P Club for Porsche enthusiasts versus Landlord Ben’s Goodfellas Car Club sponsored superbly by Porsche Chester and Martin their enthusiastic Sales Director!! Who took part but had to pick up his wife half way round as her hair appointment over ran!!…Tim’s team had fluked it last year by one point!!! What would happen this year!!?? Well everyone got round safely taking in such sights as Shakerley Mere, our next pub project the three Greyhounds Inn at Allostock and many more sights along the way.

It wasn’t a race and everyone was back in the pub for a traditional pub plate snack and a well-earned drink. Team ‘Gas Guzzler’ even managed to fit in a trip to B&Q during the ‘hunt’!!!

THE DRIVERS AND TEAMS RELAX AFTER A HARD FOUGHT HUNT

TIM COLLECTS THE TROPHY ON BEHALF OF THE 3P CLUB FOR THE SECOND YEAR RUNNING!!! POOR BEN!!

Anyway the 2012 Champs for the Goodfellas by one point from previous 2011 Champs ‘Herding Cats’, were popular ‘quizzers’ ‘Team Clueless’ pictured in their wonderful car.

The Porsche Champs 2012 were Team Smokey and the bandit!!! With defending Champions 2011  ‘Car Collins Girls’ third. The overall winners who finished in last place last year were the Boxter Bulls!!! Well done lads. So overall the Porsche Club sealed a second successive win!! Tim accepted the Cup on behalf of his team with a smug grin!!

Big thanks to our landlord Ben who put the whole thing together…. it was a great day!!! Thanks again to Ben for not sulking too much because his team were beaten!! Big thanks to Martin for sponsoring the event through Porsche Chester and putting up the first prize a Porsche experience drive round Silverstone!!!

Finally thanks to all our loyal Car Clubbers for supporting our pub and donating £50 to our Mobberley Church charity!!! Well done all of you.

Win a Porsche ‘experience’ drive at Silverstone for two people!!! 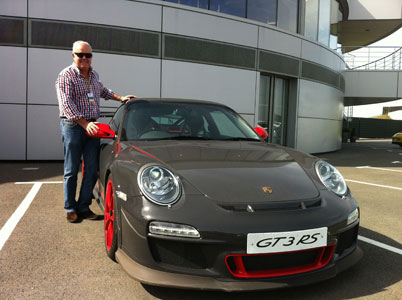 Yes this is the exciting prize kindly put up by Porsche-Chester for the individual car team finishing first at…..

The Annual Bulls Head Car Club Treasure hunt is a week away!! So come and enjoy an autumn day on the country roads of Mobberley!!!

We have had a number of teams register but there is still space for a few more!!! SO………

What you have to do now?

Please email Tim at…….. info@thebullsheadpub.co.uk to register stating your name and your car. You need to register ASAP!!!!

We are looking for 5-6 teams per club to compete for the coveted trophy. Two team members per car.

Can the ‘Goodfellas’ deliver the goods this year having lost by a ‘whisker’ to the Porsches in 2011!!???

The Treasure hunt is not a timed race so therefore everyone will have plenty of time to get round and answer the clues (hopefully) and you never know where you could end up!!

Ben takes Goodfellas Car club through the half century!!! 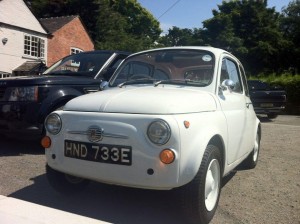 Yep this little Fiat 500 or ‘Bambino’ as I like to call them became the Goodfellas 50th Car Club member and guess what? The owner didn’t leave his email address!!! So if you know whose car this is or you are indeed the gentleman we chatted with who proudly owns this little gem of a car please let us know your email address as a prize awaits!!!!

Our landlord Ben has done very well recruiting some cracking cars of all shapes, sizes and ages since taking over the Bulls Head.

Here’s to the next half century!! 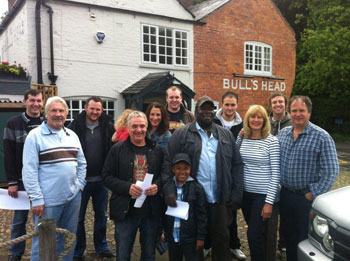 Members of the 3p and Goodfellas car clubs got together at the Bulls Head for fresh coffee and Cured Bacon baps before driving off in convoy to the Pageant of Power Car extravaganza at Cholmondely Castle close to our other pub the Cholmondeley Arms!!!

On route to the Pageant the drivers, who were made up of competition winners and enthusiasts, had to complete a treasure
hunt quiz based on landmarks on the journey towards Whitchurch on the A49!!! Andrew and his team came out triumphant and got a second Gin and Tonic for their troubles at the Cholmondeley Arms later in the day after the Pageant!! The Cholmondeley Arms boasts over 100 different gins!!!

The day stayed dry and was enjoyed by all we are still wandering where Bens team and Gregs team are!!?? Thank you for all the support from the car clubs and here’s to a summer of successful car events!!!! 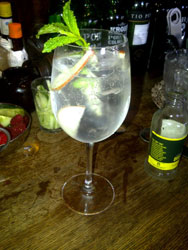 One of the many G&T’s at the Chum

Over forty people were entertained again for the annual ABN AMRO Ale trail as a thank you for hard work through the year.

Our six ale pumps reflected as always the ‘local hero’ microbrewers of Cheshire and the beers most enjoyed on the day were Cheshire Cat brewed by Weetwood and Whirly Bird brewed by Mobberley Fine Ales and of course Mobberley Wobbly Ale.

The mode of transport was the same as last year for the ale trail, an excellent old bus all the way from Halifax!! We have decided to make the bus an honorary member of the ‘Good Fellas’ car club…which makes it two buses so far!!

Tim beats Shane as ‘year two’ of the New Bulls Head is celebrated!!! 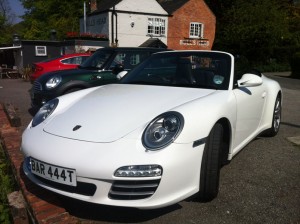 Tuesday 29th May 2012 marks the 2nd Anniversary of the new Bulls Head. How time has flown!!

Each year, Tim the Chairman of the 3p Car Club and Shane the ‘outgoing’ Chairman of the ‘Good Fellas’ Car Club compete to see who can gain the most car club members for their respective car clubs.

Well………… in year two of the new Bulls Head, Tim is victorious with 18 members gained (weirdly exactly the same as last year!!!) to Shanes 16 members!!!

Shane still has 43 members in total compared to Tim’s 36 members but remember Tim is purely a Porsche club.

Well done to Tim and bad luck to Shane.

£100 will go to Tim’s Charity the local Mobberley Church paid by Shane as he retires from the Bulls Head and the Club. A new ‘Chairman’ is being recruited as we write this………..so more news later!! 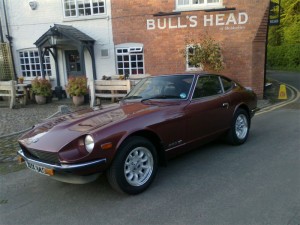 Goodfellas gets a mention on Zclub.net

Who needs a Porsche?

Went for a drive with the missus tonight, and stopped at a brilliant pub in Mobberley, Cheshire called the Bull’s Head. Superb cask ales – what more could you want?

Anyway, I noticed an unusual number of Porsches littered around outside. When I went in, a guy I have never met walked up to me and said: “Let me just tell you, you have got the finest car on the car park there – it doesn’t get better than that.” What a welcome!

It turns out there is a Porsche club meets there – the 3P club (stands for Pub, Porsche and Pint Club apparently), but the landlord decided to set up a rival car club for other marques called the Goodfellas Club – that excludes Porsches!

He told me all I had to do was take a picture of my 260Z outside the pub, email it to him and I would get a free mug and membership of the club – so I did it there and then from my phone (see attached picture).

If anyone is passing there, why not do the same? Everyone was very friendly, and the beer (and food) there is mega.