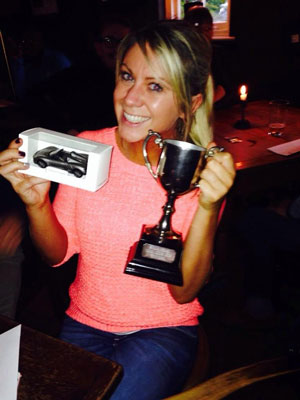 It was a good day weather wise as the cars arrived promptly at 3pm for the 4th Annual ‘Head to Head’ Treasure Hunt between the Bulls Heads two car teams, the 3P (Porsche Pub and Pint Club) and the Good fellows Car Club.

Previously the 3P team had won all three annual Head to Heads…would today be different? All teams set off on an excellent run planned exceptionally well by Sophie. There were quiz questions to answer as well as picture rounds while the teams had to find the clues en-route!!

Every team arrived back safely and intact. The scoring was done and I have to say everyone had an excellent run round and scored very well.

In the end there was a dead heat on the overall scores so it went to tie breaker and amazingly on 25 answers used for the tie breaker the two teams couldn’t be separated, so a ‘dead heat’ was declared!!

The two winning teams were the Good Fellows ‘Husbands Team’ and the 3P Club ‘Collins Girls’! Well done to both…the ‘Husbands’ were camera shy but the Collins Girls namely Lucy was proud to hold the trophy aloft.

Taking the top four cars in to account the 3P Club won the treasure hunt for the fourth time in a row but this has to be the closest competition yet. The Scooby do’s were third and the Eager Beevers fourth.

Thank you to Soph for all the hard work and to all the teams that took part and here’s to next year!!