The Whirly Bird takes off!! 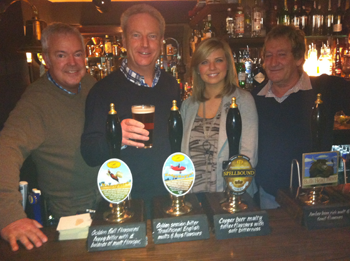 ‘Mobberley Fine Ales’ celebrated the launch of their second beer at the Bulls Head in Mobberley on Friday 28th October.

Following the superb success of their first brew ‘Hedgehopper’, a really traditional golden hoppy 3.8% ABV bitter, Phil Roberts and Ray Britland, the two partners who established Mobberley Fine Ales back in July 2011, have created an really easy to drink amber ale called ‘Whirly Bird’!!  At 4% ABV the ale is less bitter than ‘Hedgehopper’ but still has the depth of flavour we have come to expect from Mobberley Fine Ales. Needless to say it sold out on the Friday night as ale enthusiasts enjoyed a pint or two.

Bulls Head owner Tim Bird felt there was no better pub to launch the beer bearing his surname, of course this is purely a coincidence, according to Phil and Ray, but a few residents of Mobberley may argue!!! 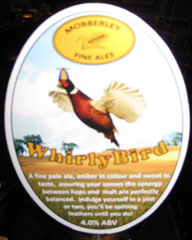 The beer badge once again depicts a Mobberley pheasant and was designed by Phil’s daughter Sophie. The graphics have been carefully designed to not only to be bright and cheerful (a bit like Phil and Ray!!), but to represent the rural countryside in which the brewery is based. This new micro-brewery is housed in an old milking parlour on a working farm, set in the heart of the Cheshire countryside.

Phil was on hand to pour the first pint from behind the bar of the Bulls Head while Ray his business partner was busy delivering a firkin of Whirly Bird to Tim’s second pub the Cholmondeley Arms in South Cheshire.

There is no doubt that ‘Whirly Bird’ bitter will ‘fly out’ where ever it lands!! (If you’ll pardon the pun!!)