T’Ale of the Dark Bull is born!!

Barry and the team here at the Bulls Head really pushed the boat out for the new Bulls Head dark ale competition! The ‘taste off’ was narrowed down to three dark ales from three Cheshire Micro-Breweries namely Wincle Brewery, Dunham Massey Brewery and Coach House Brewery all of whom sent in dark ales for the competition. The badges, as you can see from the picture here, were marked up A,B and C and through Friday and Saturday our local ale enthusiasts and regulars chose their favourite. By 8pm on the Saturday evening the first dark ale was sold out and rightly declared the winner. The 4.3% Dark brown ale from Wincle Brewery was voted the clear winner and for the Autumn and winter becomes our new ‘T’Ale of the Dark Bull’. The competition coincided with Halloween and pumpkins lined the path of the Bulls Head as spooks, Ghouls and spectres visited for a few treats!! The Dark Ale will on this week so come in and try a pint or two!! 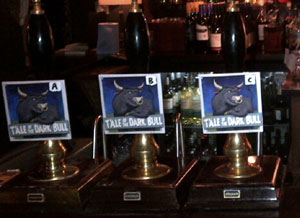 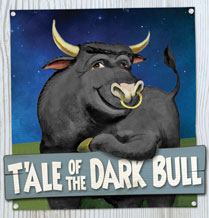 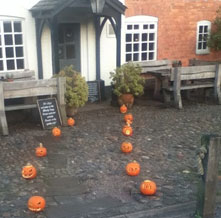