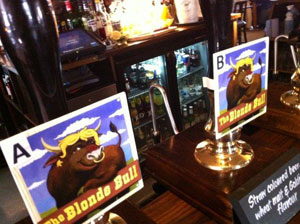 We are delighted to announce that The Storm Brewery of Macclesfield have won the right to brew ‘The Blonde Bull’ Ale for the Bulls Head this summer!!

The competition began last Monday 28th and ran until Thursday when the first Ale sold out!!

Storm won by a country mile with 57 votes in total. Tatton Brewery were again second (they were second for the 1812 Overture Ale competition too) and the Frodsham Brewery were third.

We would like to thank all the customers who took part and the Brewers for presenting their ‘blondes’ so well.

The Blonde Bull Ale will be sitting on the bar soon!!! So if you fancy a blonde moment then you know where we are!!