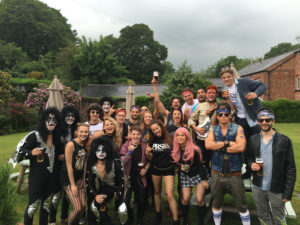 Mobberley is famous for the ‘Mobberley 8’ circuit from Easter to late summer…and sometimes in the winter too, adventurous people either work, ride on horseback but more frequently ride their bikes around the pubs of Mobberley (and a little further afield).

The Bulls Head is a popular stop off where generally the Mobberley 8’ers have a couple drinks…because the Roebuck Inn opposite is now a bistro…. And munch on our famous burger to give energy for the day ahead!

Each year we look out for great groups of Mobberley 8’ers who dress up and make an effort to have a great time while staying safe and behaving well. In past years the 101 Dalmatians and the Horse riders have caught the eye and been chosen by us as the best M8’ers of the year.

2016 is no different and when the Rock Idols…see pic….’rocked’ up at the Bully they were declared favourites to win this year’s Mobberley 8’ers of the year title. A lot of effort obviously went in to creating, Bowie, Kiss and Cougar to name but three…

So well done the Rock Idols!!! Can anyone beat them…..?