Well finally the 3p Club got together for its annual ‘Treasure Hunt’ around the lanes of Mobberley and beyond. The club members and their ‘co-pilots’ arrived last Wednesday at 7pm prompt to be briefed by ‘Lord Ted’ our quiz master and Treasure Hunt co-ordinator!!! Ted gave the eight teams their ‘treasure maps’ and the questions and sent them on their way by around 7.30pm. It was a tough evening for the teams as the questions sent them through graveyards, pub gardens and to various local landmarks. While chasing about the teams had to answer questions on the 3 ‘P’s…………. Porsches, Pints (beer) and Pub (the Bulls Head).

The aim was to win of course, but also to be in the top four finishing positions as the top four will go ‘head to head’ with the top four of the Goodfellas Car Club, who’s Treasure hunt takes place on Thursday 14th July at 7pm.

The final will be sometime in August.

Naturally the treasure hunt was not a speed test and everyone arrived back to ‘base’ safely at around 9pm. Tim welcomed everyone with a drink and some pub nibbles as Ted and Tim calculated the scores.

The winners were the ‘Collins’ girls driving ‘Classy Boxter’ who won by a ‘country mile’ from the rest!!! An honourable second was scooped by the ‘Claudia’ team with the ‘Silva’ Team in third. The top four was completed by ‘the Roadster’ that were actually in a 4S because of the rather wet weather!!!

We must say a massive thanks to everyone who took part especially The Courtenay Team who travelled from Barnsley on the night, wow!!!

The ‘wooden spoon’ was presented to the ‘Baby Boxter’ team who were last seen on a country lane in Cheshire somewhere!!

The winners got an authentic model of a GT3 and a trophy is to be made up to keep at the pub until next year’s competition!!!

Thanks too to Lord Ted for all his hard work and petrol costs!!! £60 was collected for Mobberley Church on the night!! 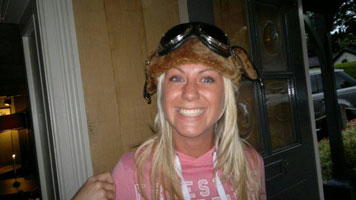 A rather happy member of the winning 'Classy Boxter' Team...Lucy 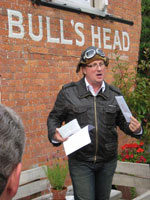 Lord Ted hands out the maps and the envelopes!!! 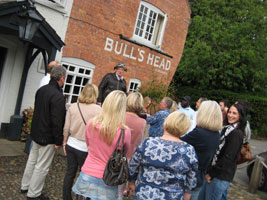