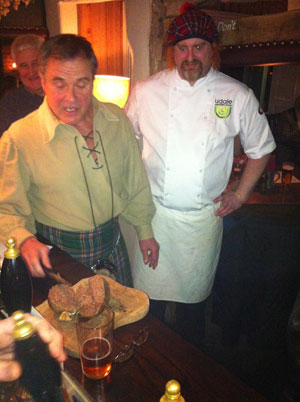 Here at the Bulls Head we have built a tradition for celebrating Robbie Burns night in real style!! This all started back when we opened nearly four years ago because our, now famous, collection of great whiskies!! (now up to 88 different styles!!)

This year was no exception when our famous local Scotsman Iain popped down (kilt included) to the Bulls Head with Robbie’s ‘Ode to a Haggis’ poem under his arm. Iain handed out copies of the poem with an English translation so our customers could follow his narration of the poem themselves!! The Haggis was paraded around the pub by head chef Steve as owner Tim piped the music (through the piped music!!) and as the haggis ‘landed’ at the bar it was ‘stabbed to death’ by Iain to the words of the poem!!

The previous day owner Tim had met Faye from the Isle of Arran Whisky distillery in the Bulls Head. She brought with her two bottles of Arrans own Robbie Burns Malt. Which we shared with whisky enthusiasts on the night. 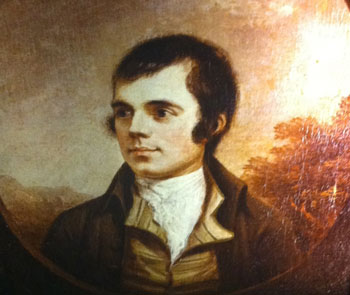 We still have a little left!! So do pop in and have a wee dram while the chill is in the air! A warm fire awaits!!

Big thanks to Iain and those Scotsmen that attended in their kilts!! Thanks to Steve for donning his Ginger wig and cooking all those Haggis!!