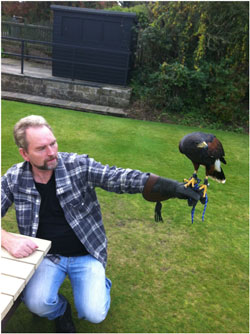 Just after we launched Mobberley Fine Ales second brew…Whirly Bird…we were visited for lunch by Harry and Emily with their Harris Hawk!! The Harris’s Hawk or Harris Hawk, formerly known as the Bay-winged Hawk or Dusky Hawk, is a medium-large bird of prey which breeds from the south western United States south to Chile and central Argentina.

Birds are sometimes reported at large in Western Europe, especially Britain, but it is a popular species in falconry and these records almost certainly all refer to escapes from captivity.

John James Audubon gave this bird its English name in honour of his ornithological companion, financial supporter, and friend Edward Harris. The Harris Hawk is notable for its behaviour of hunting co-operatively in “packs”, consisting of family groups while most other raptors hunt alone.

Anyway we are regularly visited by pet dogs (even on their own), Peacocks(grrrrh) and we’ve had the cows well now we’ve had our very own Hawk….he must have heard about ‘Whirly Bird’ Bitter!!!