New Whiskey Bible is on its way!

Its been a while but we are happy to announce that our new ‘Whisky Bible’ has arrived. This is the fifth edition of the ‘bible’ in the 8 years the
Bully has been re-opened under the ownership of Tim and Mary. Because of Barry and Mary’s Irish roots there are one or two more whiskies to try from the Emerald Isle. Ireland has quite a number of craft whiskey distillers arriving on the scene and one of these is Dingle Distillery. One has to age whiskey for three years and a day before it can be legally called Whiskey. While Dingle Distillery have been waiting for their whiskey, they have become famous for their Gin and their vodka. They had the clever idea of selling barrels of whiskey very early in the  process and this whiskey is now maturing.

The photo shows Tim outside his favourite pub in Donegal, Ireland…..the Glen Bar situated in the tiny village of Glen. The Glen Bar is the Bulls Head’s ‘twinned’ pub. Tim is holding one of the first bottles of Dingle Whiskey kindly presented to him by Aengus the landlord of the Glen Bar. This bottle takes pride of place on the wall of the Bulls Head in a very cool frame by our third fire place.

The Bible also includes a couple more Japanese whiskies and of course some Malts, as well as an English Whisky from the Lakes Distillery. The collection has grown over the years and now stands at just over 100! So get down to the Bully and finish that meal with a we dram! 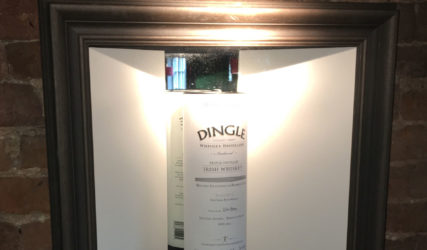 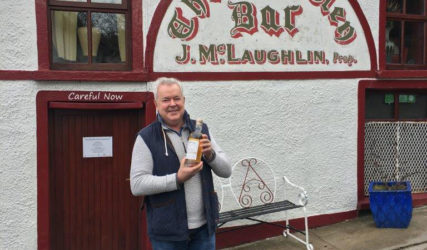