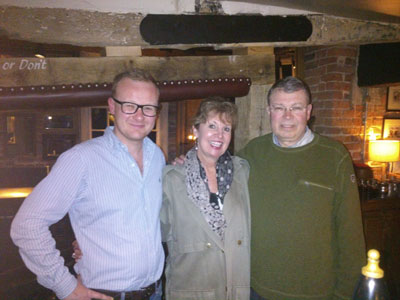 As many of you will know the Humphrey brothers who founded UMBRO the sportswear manufacturer did so here at the Bulls Head in the mid-1920’s.

The two people pictured with Ben are Lisa and Charles Humphreys, who flew out from South Carolina on something of a pilgrimage. You have probably guessed already, but just in case you haven’t, Charles (pictured) is the grandson of Harold Charles Humphrey, and was one of the last members of the Humphrey family to have any involvement at Umbro.

Charles and his wife are now in real estate and Umbro, having been sold by Nike, is now in the hands of American investors.

Charles’ mother lives in Alderley Edge so he has been visiting her and he also visited Shrewsbury where he went to school. We are sure that the highlight of his visit was having his picture taken with Ben at The Bull’s Head, his family’s companies birthplace!!!!

Weird but true…Ben has a habit of meeting ancestors of famous people at the Bulls Head …..Robbie Burns the famous Scottish poet was the great, great uncle of our visitor last Burns night…and Ben had his picture taken with her too. Any guests to the Bulls Head with famous ancestors see Ben!!