Bulls Head is a film set!!! 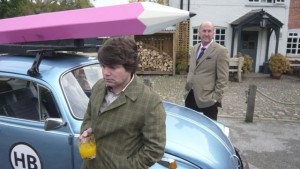 Ben and the team have been entertaining the stars with nibbles and refreshments while a ‘pilot’ of a new programme was filmed using the famous Bulls Head as a back drop!!

The programme is called ‘The Home Office’ and it is about a stationary salesman played by Mr Russ Abbot himself (see picture).

The film crew were only at the Bully for one morning. Chris, who is one of the production team felt the Bulls Head made the perfect local Pub for Russ Abbots exploits.

When we have further details of viewing times etc. then we will let you know!!

‘Film star’ can now be added to the Bulls Heads many talents!!!

Can you believe our landlord Ben…he only recruited Russ and his ‘stationary’ VW Beetle as a ‘Goodfella’ Car Club Member while he was acting out a few scenes …how cheeky!! 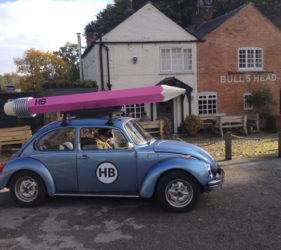 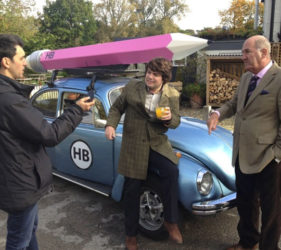