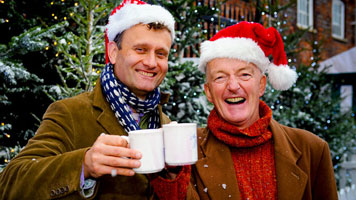 The Bulls Head was contacted by BBC 2 for a show starring Oz Clark and actor/comedian Hugh Dennis (pictured)!! They had found out about our now famous Mobberley Wobbly Ale and it’s aphrodisiac qualities!!!

They wanted to drink the beer on the show which is about great British food and drink. They were on a tight time schedule in the northwest and tried to get our great beer to the Manchester Beer festival but the organisers couldn’t fit it in!!??

So we said the only way to sample Mobberley Wobbly is to drink it proudly in the Bulls Head in the village of Mobberley, as you cannot get it anywhere else!!! Weetwood the brewers of ‘Mobb Wobb’ refused to giveaway the recipe when the BBC rang them!!

So Oz and Hugh you will have to come back later in the series for a pint or three!! The first pint is on us, boys!!