A Brilliant New Year’s Eve at the Bulls Head. 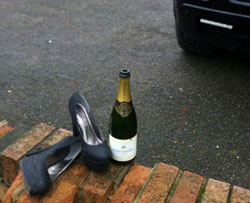 Oh what a night…… late December back in 2011!!! The busiest day since we opened way back in May 2010!! Thank you so much to everyone for the perfect New Year’s eve party in the pub!! Food was eaten and the drinks flowed as the music cranked up a little to the sounds of Chesney Hawkes, ABBA, TheBeegees and many more.

As Midnight struck Shane our landlord and pyrotechnics expert set off his fireworks to magnanimous applause and appreciation!!! So good were they (the fireworks) that the Olympics Committee are considering using Shane for the
opening of London 2012!! The rest of the evening was spent drinking and eating our delicious curry until carriages took people off at 1.30am or so!!! 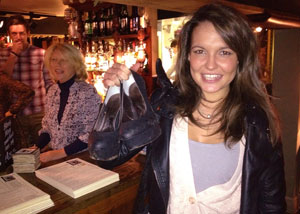 We even had our own ‘Cinderella’ who left in such a hurry from the ‘Bull’ (ball….get it?) She left her rather high heeled shoes outside our Pub!!! Very close to an empty bottle of Champagne!!! (see pic). Tim our owner and general ‘Prince Charming’ found the shoes the next morning whilst tidying the pub for News Years Day lunch!!! The shoes were taken to the office for safe keeping in the hope that ‘Cinders’ could be found!!

As the story goes there was no need to go around Mobberley to find Cinderella as at 5pm on New Year’s day ‘Cinders’ arrived to pick up her ‘heels’ from the good King Shane as Prince Charming had gone home to sleep!!!

A happy ending as always……………….Happy New Year to all our
customers!!!