50,000th Pie is served as Leeds being best is celebrated!!

As another famous Pie and Cask Ale week came to an end, regular customer Ronnie was the man in the right place at the right time as he pondered the Bulls Head menu and special ‘Pie week’ board. Little did he know Landlord Barry was on the prowl to find the 50,000th legendary Steak and Mobberley Wobbly Ale Pie eater.

As Ronnie approached the bar to place his order there was a tension in the air…….but as the words left his lips “a Steak and Ale Pie please” little did he know what lay ahead…..big cheers, £50 of Bulls Head gift vouchers, a photo and Barry at his table present his plate, after Andy and our team of chefs prepared the 50,000th Steak and Mobberley Wobbly Ale Pie since we have opened, to a famished Ronnie!! Thank you to all the 50,000 people that have enjoyed our pies over the years….you are part of a very special club and well done to Ronnie!!

Now on the Ale front….Yorkshire Ales were celebrated during cask Ale week…our owner Tim is a Yorkshire man and Barry treated our cask Ale loving customers to a few Ales to savour from the wrong side of the Pennines(according to some) not least, Leeds Best, from the Leeds Brewery. Naturally this caused a little commotion with a few of our customers including Al and Gol who are Birmingham and Blackburn fans respectively. They saw this as a time to remind our Leeds Utd supporting owner Tim that his team don’t reflect the beer!! ‘Best’ being the key word! They simply aren’t!! Who will have the last word though!!??

So another great week draws to a close with plenty of great Ales to enjoy….the Yorkshire Ales remain this week too…and the pies continue to be baked for the next 50,000 customers! 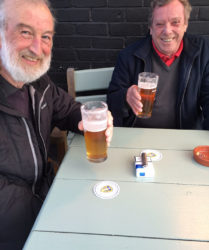 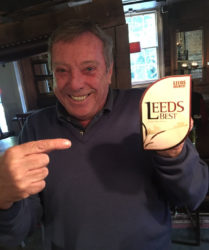 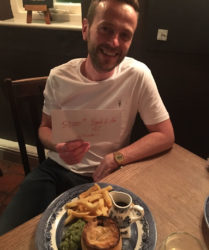 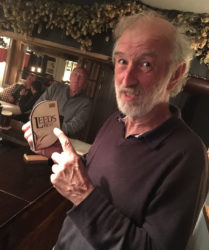