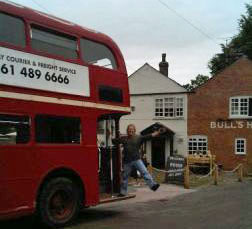 Shane is taking his club the ‘Goodfellas’ seriously and has already (for the time been at least gone into an early lead with his alternative car club!!!

Tim is pushing for Porsches everywhere to show their metal outside the Bulls Head and join the 3p club!!!

Shane at first thought it was all about ‘bums on seats’ as they say, so a Double Decker bus became his first member!!!

Shane looks a natural ‘conductor’ to me!!”