Ten cars, two teams, a sunny day and the beautiful Cheshire countryside what else could you ask for?? The engines were revving and the competition was hot…Tim’s 3P Club for Porsche enthusiasts versus Landlord Ben’s Goodfellas Car Club sponsored superbly by Porsche Chester and Martin their enthusiastic Sales Director!! Who took part but had to pick up his wife half way round as her hair appointment over ran!!…Tim’s team had fluked it last year by one point!!! What would happen this year!!?? Well everyone got round safely taking in such sights as Shakerley Mere, our next pub project the three Greyhounds Inn at Allostock and many more sights along the way.

It wasn’t a race and everyone was back in the pub for a traditional pub plate snack and a well-earned drink. Team ‘Gas Guzzler’ even managed to fit in a trip to B&Q during the ‘hunt’!!! 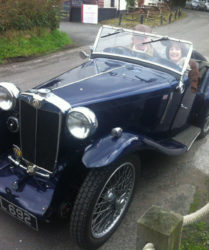 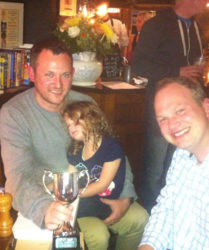 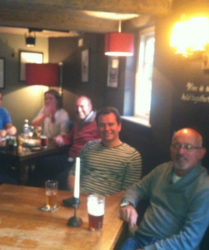 THE DRIVERS AND TEAMS RELAX AFTER A HARD FOUGHT HUNT 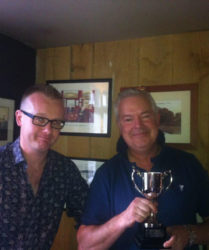 TIM COLLECTS THE TROPHY ON BEHALF OF THE 3P CLUB FOR THE SECOND YEAR RUNNING!!! POOR BEN!!

Anyway the 2012 Champs for the Goodfellas by one point from previous 2011 Champs ‘Herding Cats’, were popular ‘quizzers’ ‘Team Clueless’ pictured in their wonderful car.

The Porsche Champs 2012 were Team Smokey and the bandit!!! With defending Champions 2011  ‘Car Collins Girls’ third. The overall winners who finished in last place last year were the Boxter Bulls!!! Well done lads. So overall the Porsche Club sealed a second successive win!! Tim accepted the Cup on behalf of his team with a smug grin!!

Big thanks to our landlord Ben who put the whole thing together…. it was a great day!!! Thanks again to Ben for not sulking too much because his team were beaten!! Big thanks to Martin for sponsoring the event through Porsche Chester and putting up the first prize a Porsche experience drive round Silverstone!!!

Finally thanks to all our loyal Car Clubbers for supporting our pub and donating £50 to our Mobberley Church charity!!! Well done all of you.