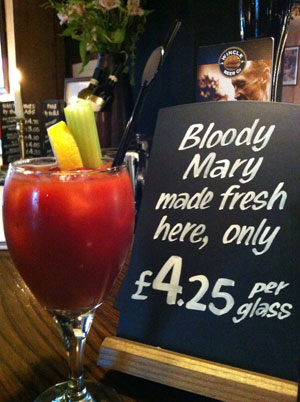 ‘Bloody Marys’ are all the ‘rage’ at the Bulls Head!!

We have seen a real resurgence in the popularity of ‘Virgin’ Mary’s and ‘Bloody Mary’s’ since we opened in May 2010, particularly on a Sunday!!!

Here at the Bulls Head we are definitely famous for them as we now mix two types firstly the Vodka based ‘Bloody Mary’ with the vodka of your choice, a ‘big Tom’ tomato juice, ice and garnished with lemon and celery and a secret ingredient or two and then it is over to you to hit the Tabasco and Worcestershire sauce!! This was Tim and Shane’s initial recipe conjured up for the opening of the new Bulls Head back in May 2010. At £4.25 a glass for this ‘Bloody’ version it has to be done!!!

Secondly as part of the Bulls Heads 200th anniversary year celebrations in 2012 Tim has gone back to the roots of the ‘Bloody Mary’ and was influenced by a Sherry and Food matching evening he attended. So now you can also order the traditional ‘Bloody Mary’ made with Chilled Manzanilla Sherry (instead of vodka) and a hint of homemade horseradish!!!